History of the DGSA 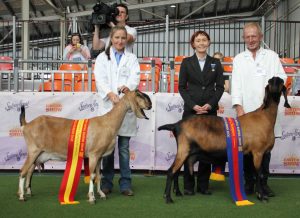 History of the DGSA

Goats first came to Australia with Captain Phillip on the First Fleet. It is believed that 19 goats arrived in 1788. They were commonly used to supply milk on any sea voyage. The marines knew the value of the “poor man’s cow.” As many animals as could be accommodated would be needed in the new colony and were taken on board the ships at Cape Town.

Seven months after settlement, the sheep had met with untimely and rather suspicious deaths. Most of the cattle had gone walkabout and were found many years later at Camden, having multiplied in number. The friendly goats browsed close by and were milked regularly. They played a major role in saving the new colony from starvation.

As the early settlers sought new horizons and moved around the colony setting up their farms, establishing the rail line and mining camps, the goat was included as an essential provider. A survey conducted in 1796 revealed there were 1400 goats in Australia and only slightly more sheep.

Throughout outback towns in Queensland, the goats enjoyed a licence to roam. Families kept their favourites to supply milk. Wethers were often used as beasts of burden, harnessed to wagons and drays to cart wood and water. The “billy” cart is found in museums, antique stores and junk yards today.

No official records were kept but it is known that one member of the Society, Mr. John Chisolm of Wantalana Stud in Queensland, was breeding dairy goats around 1900. Another Queenslander, Mr. Archie Morrison, imported a Saanen buck, two Saanen does and an Appenzel doe in 1922. He was not the first to do so.

In 1913, New South Wales Department of Agriculture recognised the growing need for improvement and imported Saanens from Europe. These and their progeny formed the foundation of the Nyngan Experiment Farm in 1919 to improve the milking quality of goats. In 1933, twenty years later, the farm was closed. Descendants of these animals spread throughout Australia, including Tasmania.

By now, goat breeding was sufficiently well established for a group of breeders to form a Stud Book Society. The first meeting was held on 12th May, 1934, at Brookvale, north of Sydney. On 14th July, a meeting was held and The Milch Goat Society of Australasia was constituted, initially having 15 members. Over the years the Society has undergone several changes of name.

In 1947, a decision was made to amend the constitution and create a Federal Council with State Branches. This came into operation from the 1st July, 1948. Rules were based on the Jersey Society. The Australian Saanen Milch Goat Association also finally amalgamated with the newly named society, The Goat Society of Australia in1948 but it took until 1957 before all the States became Branches of the Society.

In 1944 the Department of Agriculture in New South Wales founded the Condoblin Experiment Farm to study the behaviour and performance of dairy goats. High standard Saanen and Toggenburg goats were sourced and imported for this research. The valuable genetics of the animals bred at the State farm would eventually be introduced into many herds throughout the country. An outbreak of the dreaded enterotoxaemia in the autumn of 1951 was responsible for the loss of many of the imported animals. Herd Recording began in 1951 and figures were used to evaluate the influence of the sire on milk and butterfat production.

Records were also kept on the inheritance of horns, the incidence of hermaphrodism, birth weights, growth curves and length of gestation. Investigations were carried out into disease control, worms, mastitis, the cause of “bent leg” and infertility in bucks.

The N.S.W. government decided the farm was no longer economically viable so a dispersal sale was held in March of 1962. The famous herd of Saanens was sold by auction, some going to N.Z. and India and the remainder were bought by breeders representing all states except Tas. and W.A. The top price (180 guineas) was for State Konrad, a Saanen buck purchased by Mrs. C. Mewett from N.Z.

Information and data from the research conducted at the farm helped improve the standard of goats and the management practices of breeders in Australia.