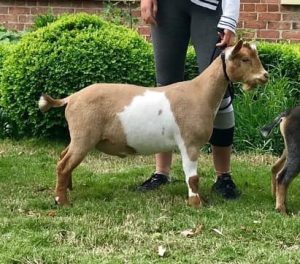 Small goats from West Africa (the West African Dwarf) and/or the Southern Sudan were the origins of the Nigerian Dwarf Dairy Goat. These little goats were used as a feed source for the large cats which were shipped to zoos in the USA. Those that survived became zoo attractions themselves, breeding and increasing their numbers until some were sold to private collectors/breeders. Eventually these animals developed into two distinct types one being cobby, the Pygmy, and the other a dairy styled goat, the Nigerian Dwarf. The Nigerian Dwarf breeders continued to refine and develop the breed to become miniatures in conformation of a standard height Dairy Goat.

The Nigerian Dwarf produces an average of 1.8 litres of milk at their peak with the maximum being 4 litres for exceptional does.

Their butterfat percentage ranges from, on average, 6%-10% with the protein content being correspondingly higher than that of standard height does. Cheese produced from their milk has a very smooth and silky texture making the Nigerian Dwarf a very popular dairy goat for artisan cheese makers.

HEAD (skull, eyes, ears, mouth, nostrils):Medium length. Facial line – dished or straight. Ears medium sized and pricked. Well-developed muzzle. Polled or disbudded, eyes large and bright and set well apart, can be either brown/gold or blue with no preference given to either colour, no coarseness.

NECK:Blending smoothly into the shoulders with no coarseness, with or without tassels. Does, long and feminine. Bucks, masculine and strong.

FOREQUARTERS:Fine withers, blending firmly into shoulders, wide and deep in bucks with medium width and depth in does.

BODY(barrel):Triple dairy wedge with good spring of rib (which are backward sloping with clean flat bone) and proportional length to height.

UDDER:Broad attachment high at rear and well forward in front (at least as far forward as the front of the hip bones) and no pocket, not pendulous or unduly divided, side well attached to inner thighs, strong medial ligament, soft textured and showing good capacity. Skin tan to black.

TEATS:Set in the centre and lowest point of each udder half, to be a reasonable size to enable hand milking or ease of cup placement.

TESTICLES:Two testicles in a well attached scrotum which is relatively even (in summer may have the appearance of being pendulous).

RUDIMENTARY TEATS:Two good size teats set slightly to the fore and side of the scrotum, milking bucks will have doe sized teats.

COAT:Soft, hair is short to medium in length.

DISQUALIFICATIONS:Wry face. Double or supernumerary teats. Double orifices. Blind teats. Spurs/sprigs on teats. Pendulous ears, LaMancha ears. Undescended testicles in bucks, or one testicle only. Obviously undershot or overshot jaw (side profile). Over breed standard recommended maximum height or under the breed standard minimum height when measured at 4 years of age (or older) disqualifies animals from registration in Purebred Section.