The Australian Melaan takes its name from its colour and what is thought to be its origin in a Saanen buck imported in 1943. The ‘Mel’ is from melanin or black pigment and the ‘aan’ is from Saanen. Thundersley Vanquisher, though white, carried colour and is famous for producing prize-winning Saanen, Toggenburg and British Alpine kids. He also produced black offspring that were mated with British Alpines. It is thought that Vanquisher carried the black gene from the black dairy breeds the Spanish Granada or Murcian.

Over the years there have been Toggenburgs and British Alpines unrelated to Vanquisher who have produced solid black kids. Pror to the introduction by the DGSA of an Experimental Listing for all black goats, these kids were either destroyed or bred back into an existing breed, usually the British Alpine. This helped establish the gene for solid black in the British Alpine.

Solid blacks were first accepted as an experimental breed by the DGSA in 1995 and was named and recognised as a breed in 2000. Since then they have proven themselves to be a popular breed suited to Australia’s variable weather conditions. They are found from the sub-tropics to the far south of the continent. They are a particularly intelligent breed as well as being highly productive. 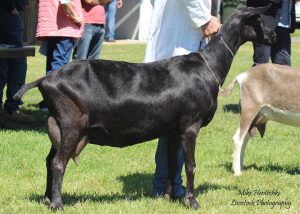 NECK:Blending smoothly into shoulders. Does long and fine. Bucks long, fine but strong, not coarse. With or without tassels which if present must be black.

BACKLINE:Back strong, straight and horizontal or slightly rising to the hips.

FOREQUARTERS:Fine and high withers, blending firmly into the shoulders. Chest full between the forelegs, deep in bucks, fairly deep in does, smoothly blending when viewed from front and side.

HINDQUARTERS:Gradual slope from the hips to the tail, good width between hips, thurls and escutcheon. Rump long and flat, pin bones wide and prominent. Tail of good length carried straight.

TEATS:Two of adequate size for ease of milking, well attached and distinct from the udder. Set well apart, pointing slightly forward and down, not outward.

TESTICLES:Scrotum well attached, relatively even and not unduly divided or pendulous.

RUDIMENTARY TEATS:Two set wide apart, slightly to the fore and sides of the scrotum, of good size but not overdeveloped, unless the buck is milking.

COLOUR:Even intense black with no tendency to salt and pepper markings.

DIFFERING FROM THE IDEAL (found and recognised):Less than intense black. Horned. Nose with slightly raised bridge. Uneven tassels. Longer fringe along backline and on hindquarters on does.