Saanens in Australia began as improvements on settler goats were made by the Department of Agriculture in New South Wales (NSW) importing two bucks and several does of the breed. The imports came from France and Swiszerland and were located on the Experimental Farm at Nyngan, NSW. The imports were good quality animals and produced excellent milking stock. A further two bucks were added to the Nyngan herd in 1929.

At around the same time Saanens from England were imported into Queensland.

All the imported goats had a long term influence on the breed, building up a large breeding pool of high quality animals.

The Toggenburg originated in Switzerland where its breeding was strictly regulated for purity and type. It was widely exported and has a presence in many countries, including the Australia, Great Britain and the United States of America. When imported into Britain the Pure Toggenburg was maintained by some breeders while others used selective outcrossing to develop a larger animal. Where the Pure Toggenburg had a short, dished face and well developed fringes of hair the British Toggenburg had shorter hair and a longer face. It also had more colour variation, ranging from light fawn to dark chocolate.

Between 1947 and 1953 Australia imported six bucks and fourteend does, some in kid. Six more bucks and three does were born from these does. Of these imports, four were Pure, while the remainder were British Toggenburgs.

The first British Alpines were imported into Australia in 1958, although the breed was slow to establish itself due to the extremely limited gene pool. Crossbreeding with Saanens and Toggenburgs carrying a recessive black gene enabled the breed to be established.

The Anglo Nubian was developed in Great Britain using Middle Eastern and Indian stock, firstly with existing native goats and later by crossing with the imported Swiss breeds. The Middle Eastern breeds were Nubians from Egypt and Zariby from Eritrea, while the Indian breeds were the Jumna Pari and Chitral. Thses exotic breeds were of differing build and appearance, but all distinctly different to the British goats with the crossbred offspring showing distinct ‘Nubian’ characteristics.

The Anglo Nubian was well established in Britain prior to the introduction of the Swiss breeds, with goats appearing at the first goat show in 1875.

The Australian Melaan takes its name fron its colour and what is thought to be its origin in a Saanen buck imported in 1943. The ‘Mel’ is from melanin or black pigment and the ‘aan’ is from Saanen. Thundersley Vanquisher, though white, carried colour and is famous for producing prize-winning Saanen, Toggenburg and British Alpine kids. He also produced black offspring that were mated with British Alpines. It is thought that Vanquisher carried the black gene from the black dairy breeds the Spanish Granada or Murcian.

Over the years there have been Toggenburgs and British Alpines unrelated to Vanquisher who have produced solid black kids.

All brown goats had appeared from time to time in dairy herds in Australia, but it was not until the 1990s that some breeders decided to keep them and try to establish them as a breed. Browns had come from Saanen, Toggenburg and British Alpine backgrounds. At the beginning of the 1990s all-brown stock were to be found in three states in sufficient numbers to enable breeders to exchange stock and begin a breeding programme.

In Victoria a large enough herd was developed for brown to brown matings to occur. These matings produced consistent type and colour and it was determined that the solid coat was recessive to white Swiss markings.

The first genetic material imported into Australia was by Michael and Ulrike Garwood (First Fleet) who imported embryos and semen in early 2014 and Paul Hamilton (Semtech Animal Breeding Service) who imported semen in 2015. The Nigerian Dwarf produces an average of 1.8 litres of milk at their peak with the maximum being 4 litres for exceptional does. 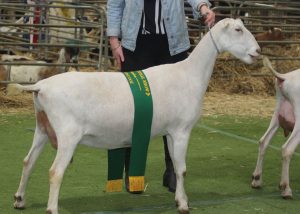 The most obvious distinguishing feature of the Lamancha is the very short ears. The name arose from a shipment of short eared goats that were sent to the Paris World’s Fair for exhibition in 1904. The inscription on the shipment was unclear, but “LaMancha, Cordoba, Spain” could be read and the name became the accepted term for the American version of the goat as well. 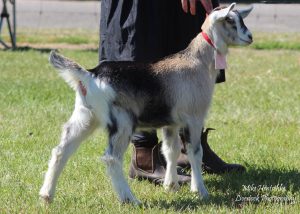 Alpine or French Alpine goats were first brought to North America in 1922. All modern goats registered as purebred Alpines in the United States are directly descended from these 22 animals. The Alpine is now amongst the most numerous of the breeds in America.

In May 2016 the Dairy Goat Society of Australia approved and provided a Standard and registration under the name of “Alpine”. The first kids by artificial insemination were born in November 2014 and later accepted into the register. Breed semen having been available for just three years at writing (2016) finds the development of the breed in its infancy with as yet a small number of breeders beginning to assist in that development. 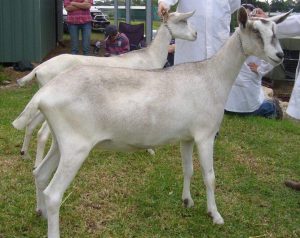 Sable goats are derived from the Saanen breed which originated in Switzerland. They may be any color or combination of colors except white or light cream.Sables are the result of the interaction of recessive genes from the sire and from the dam. If the offspring has a dominant gene for white color, the animal is white and thus a Saanen and not a Sable. Color patterns can be complex; however, it appears that if the animal has two recessive genes, one from each parent, a colored coat is the result. Sable goats have various color patterns. Because the colored genetics were brought in with the original Saanen imports from Switzerland. Sables also have a darker skin colour than Saanens. Their darker skin compared to Saanens makes them no more prone to skin cancer than are other breeds while retaining all the Saanen’s superior characteristics.