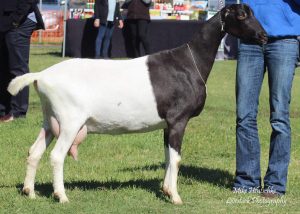 The most obvious distinguishing feature of the LaMancha is the very short ears. Short eared goats have been known in many places since ancient times but the development of this dairy breed occurred in America. Spanish Missionaries brought a dual purpose short eared goat to California. These goats, known as ‘monas’ or ‘monkeys’, spread throughout the American west as the Spanish moved and are thought to be the precursor of the present day LaMancha.

The name arose from a shipment of short eared goats that were sent to the Paris World’s Fair for exhibition in 1904. The inscription on the shipment was unclear, but “LaMancha, Cordoba, Spain” could be read and the name became the accepted term for the American version of the goat as well.

The first breeder to establish a herd of LaManchas was thought to be Phoebe Wilhelm who owned around 125 LaMancha type goats in the 1920’s. After years of hybridization with other breeds to build numbers, the LaMancha characteristics continued to dominate. Many breeders contributed to the development of the breed, but much credit is given to Eula Fay Frey who was located in southern Oregon.

The American LaMancha registry was opened with around 200 goats on January 27, 1958.

MUZZLE:Well-developed without coarseness. Side profile should show no tendency to undershot or overshot jaw.

NECK:Clean at junction to neck, with or without tassels, blended smoothly into shoulders. Does long and fine, bucks with strength not coarseness.

BACKLINE:Strong, straight and horizontal from withers to hips.

FOREQUARTERS:Withers sloping into shoulders and blending into the body. Chest showing medium width and depth in does, greater capacity in bucks.

UDDER:High wide attachment at rear and well forward in front without pocket. Not pendulous or unduly divided. Soft textured and showing good capacity.

TEATS:Of adequate size for ease of milking, well attached and distinct from the udder. Set well apart, pointing slightly forward and down not outward.

TESTICLES:Scrotum well attached, relatively even and not divided or unduly pendulous, carrying 2 testes.

RUDIMENTARY TEATS(bucks):Two, set wide apart slightly to the fore and side of scrotum, of good size but not overdeveloped unless the buck is milking.

COAT:Short, fine and glossy. Bucks may have a longer coat.

COLOUR:Any colour or combination of colours is acceptable with no preferences.

DISQUALIFICATIONS:Blind teat. Double teat(s). Supernumerary teats. Double orifice. Evidence of hermaphroditism/intersex. Wry face. Buck with one testicle or with abnormal testicles. Anything other than gopher ears on bucks. Ears other than true LaMancha type on does.