The Toggenburg originated in Switzerland where its breeding was strictly regulated for purity and type. It was widely exported and has a presence in many countries, including Australia, Great Britain and the United States of America. When imported into Britain the Pure Toggenburg was maintained by some breeders while others used selective outcrossing to develop a larger animal. Where the Pure Toggenburg had a short, dished face and well developed fringes of hair the British Toggenburg had shorter hair and a longer face. It also had more colour variation, ranging from light fawn to dark chocolate.

Between 1947 and 1953 Australia imported six bucks and fourteen does, some in kid. Six more bucks and three does were born from these does. Of these imports, four were Pure, while the remainder were British Toggenburgs. The major importer was the New South Wales Department of Agriculture’s State farm at Condobolin. They bred considerable numbers and dispersed Toggenburgs throughout Australia.

The breed’s robust nature makes it a hardy goat able to look after its best interests. It prefers temperate regions but is found in all climates, with its dark skin providing good protection against skin cancer. 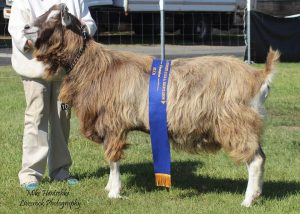 NECK:Clean at junction with head and blended smoothly into shoulders, with or without tassels. Does long and fine, but not too slender. Bucks fine and strong, not coarse.

FOREQUARTERS:Fine withers, with shoulders sloping and blending into body. Chest full between the forelegs, deep in bucks, fairly deep in does.

HINDQUARTERS:Gradual slope from hips to tail, good width between hips and between thurls. Rump broad and strong, pin bones wide and prominent.

UDDER:Carrying well up the back and broadly attached with good fore development. Not pendulous or unduly divided, showing good capacity. Skin: colour fawn to dark brown and softly textured.

TEATS:Of adequate size for ease of milking, well attached and distinct from udder. Set well apart, pointing slightly forward and down not outward.

RUDIMENTARY TEATS:Two, set wide apart slightly to the fore and side of the scrotum, of good size but not overdeveloped, unless the buck is milking.

COAT:Does and Bucks to have a short coat, a short coat with longer fringes, or a long coat all over.

COLOUR:Light fawn to chocolate (with no preference for any shade) with white Swiss markings as follows – facial stripes from above the eye to the muzzle, edges and tips of ears, legs from the knees and hocks down to hooves and insides of legs to trunk, on rump and around tail. Spots at base of tassels or on neck in place of tassels. Facial stripes may be indistinct in mature bucks.