Saanens in Australia began as improvements on settler goats were made by the Department of Agriculture in New South Wales (NSW) importing two bucks and several does of the breed. The imports came from France and Switzerland and were located on the Experimental Farm at Nyngan, NSW. The imports were good quality animals and produced excellent milking stock. A further two bucks were added to the Nyngan herd in 1929. At around the same time Saanens from England were imported into Queensland. All the imported goats had a long term influence on the breed, building up a large breeding pool of high quality animals. The Nyngan farm closed in 1933, but in 1944 the NSW State Government established a similar farm at Condobolin. Female descendents of Nyngan bloodlines were bred to two foundation bucks, forming the ‘State’ stud. Over time the State stud imported a number of other bucks and does, strengthening the Saanen bloodlines. Combined with Saanen stock imported by many non-government studs, the breeding program allowed the Saanen to be developed into a high-class milking goat. Good breeding and management has brought the Australian Saanen a number of world records for production, establishing a strong reputation as a dairy breed. Its placid nature and strong milk production along with the numbers available had made the Saanen a popular choice among goatkeepers. 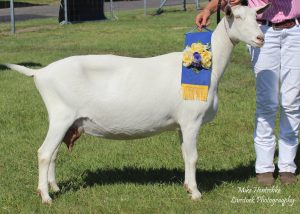